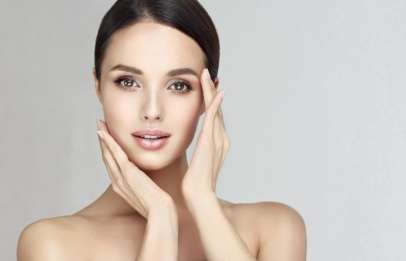 Radiofrequency is “a type of energy, which is measured in “frequency,” or wavelengths per second.” All energy types emit waves. These can be in the form of sound waves, such as from music, to the sun’s rays. Scientists classify waves according to their frequency on the electromagnetic spectrum.

Radiofrequency (RF) is one type of wave. We find these waves in everyday processes: WiFi signals, radio and TV waves, and microwave ovens. The RF energy used in skin tightening is on the low end of the electromagnetic spectrum. It has been used in non-invasive skin tightening procedures since 2001, but has recently gained traction as celebrities have raved about its effects.

RF targets collagen and elastin production just like microneedling does. However, RF uses heat instead of micro injuries to reach the lower layers of your skin to produce a more youthful appearance. Like microneedling, RF improves skin tone and structure as well as improves the surface of the skin, which includes skin discolorations.

Microneedling has formally been around since the late 1990s. Microneedling harnesses the body’s ability to heal by creating micro injuries in the skin. These injuries trigger the skin to produce collagen and elastin, which creates a new layer of skin to boost the injured layer. The result of this extra skin per se is diminished lines and wrinkles, decreased appearance of acne scars and stretch marks, and a tightening of the skin, helping to relieve the sagging of skin.

WHAT IS RF MICRONEEDLING?

RF microneedling has added the power of radiofrequency treatments to microneedling. The idea for this new anti-aging treatment has been around for almost five decades, and now technology has finally caught up to make this idea a reality, akin to the story of the development of the airplane. Da Vinci had the idea (and probably since the dawn of man who first saw a bird fly), but it took up until the beginning of the twentieth century for technology to make this a reality.

When you use RF microneedling, you get the power of two treatments in one. RF waves are delivered through the needle pricks to the deepest layers of the skin, depending on the depth of the microneedles. You get twice the boost in collagen and elastin production and twice the power of tightened skin and diminished scars.

WHAT ARE THE BENEFITS OF RF MICRONEEDLING?

RF microneedling is known for being a virtually pain-free non-ivasive cosmetic procedure. Results are similar to laser procedures, but with less discomfort and downtime.

HOW DOES RF MICRONEEDLING WORK?

A local, topical anesthetic will be applied to numb the treatment. Treatment itself usually lasts about an hour total, depending on the size of the treatment area. A device very similar to a microneedling pen transmits the radiofrequency at the same time the micro injuries are made. After an RF microneedling procedure, expect your skin to be red for a couple of days as well as more sensitive. There is really no downtime, and the patient can return to normal activities within one day.

IS RF MICRONEEDLING FOR ME?

Most patients will see accelerated results, with the number of treatments required to achieve your desired results between two and three about a month apart. With just traditional microneedling and radiofrequency treatments by themselves, it typically takes four to six treatments. However, everyone is unique and treatment sessions are determined by the severity of the skin issues to be addressed.

The stem cells and exosomes we offer is the same product from the same company the Federal Government uses in 157 Veterans Administration hospitals, the Department of Defense and the active military. Colts Neck Stem Cells and the Federal Government both use the same source of stem cells and exosomes, from the same company, chosen for its impeccable safety record and for the most vibrant / potent form of stem cells & exosomes available today.

Colts Neck Stem Cells routinely provides free information seminars so you can learn about all the tremendous advantages stem cells and exosomes have to offer. We then provide a free medical consultation with one of the world’s top regenerative medicine, stem cell & exosome experts. Colts Neck Stem Cells medical director is Dr. Joanna DeLeo, DO, general surgeon and regenerative medicine expert from Harrisburg, PA. She will discuss every detail from your medical records, your medical history, your previous treatments and customize a specific stem cell therapy and / or exosome therapy regiment based on your specific needs. Colts Neck Stem Cells is a research-based company with medical advice based on the independent research available for your exact condition. Multiple research papers form hospitals and universities, Dr. DeLeo’s sophisticated expertise, additional PhD’s and pharmacist opinions all work together in providing you with the most advanced, most sophisticated stem cell therapy and exosome therapy treatments available.